According to Jane Forsyth, a geobotanist, there are specific plants that prefer the acidic sandstone hills of eastern Ohio.

Sourwood gets its name from the slight sour taste of its leaves. It is also very attractive to pollinators due to its white flowers, and the honey that bees produce via its nectar is highly sought after — sourwood honey!

The hemlock tree was one of my favorites that we encountered on the trip (I just love the tiny cones it produces!) Hemlock is a great source of tannic acid, which is integral in tanning leathers. Additionally, it can take 250-300 years to reach maturity and can live for 800 years or more!

The next two we did not see on our trip to Deep Woods, but they are listed by Jane Forsyth as common acidophiles:

Nowadays, the chestnut oak is commonly planted along roads, parking lots,  and highways due to its ability to grow in nutrient-poor and rocky substrate and is a great shade tree. 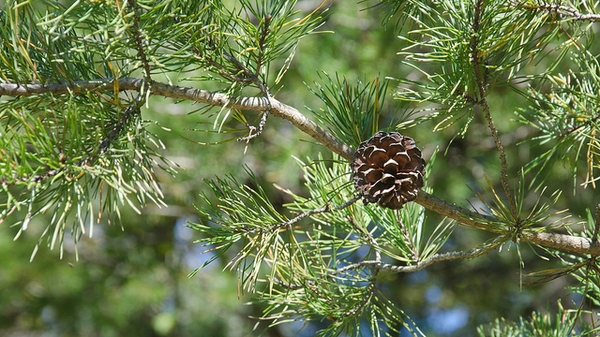 Scrub pines have a mutualistic relationship with a fungus that grows on its root system. The fungus allows the scrub pine to survive and thrive, and the tree’s roots should always be covered in old soil to ensure that the fungus is present and healthy.

The chestnut blight is caused by the fungus Cryphonectria parasitica, a vascular tissue pathogen, and is actually a canker disease. The fungus is native to East and South East Asia, but found its way to North America and Europe in the early 1900s. When infected, branches and stems will die off quickly, similar to shoot blight. The fungus is able to travel to other trees via wind dispersal of its spores. Management of this disease includes quarantining infected trees, and breeding for resistance of the disease.

Butternut canker is a fungal disease that attacks butternut trees and causes an infection. Is is thought that the canker originated outside of the U.S. and first appeared in Wisconsin in 1967. This disease has impacted and killed up to 80% of butternut trees. The cankers look like long fissures along the trunk, or smaller ones can appear around branches. These cankers cut off nutrients and water to the rest of the tree above the canker. As of right now, there is no cure for the fungal disease. However, if cankers on the branches are caught early, the affected branch can be removed and pruned.

The Appalachian gametophyte is neat because it reproduces asexually via gemmae dispersed by water, wind (short distances), or even insects and slugs (Kimmerer and Young, 1995). The gemmae are much larger than spores, so they are unable to be dispersed over long distances. It exists in its vegetative gametophyte state and is one of three fern species to not produce sporophytes. The Appalachian gametophyte typically grows on porous rocks, usually close to water and moist environments.

The limited dispersal of the Appalachian gametophyte is supported by the absence of the species beyond the glacial boundary naturally, but it can survive when transplanted. It is estimated that this species lost its ability to produce functioning and mature sporophytes either before or during the last Ice Age.

It is unlikely that the current populations of Appalachian gametophyte are being supported and sustained by long-distance dispersal of some tropical sporophyte based on the New York distribution and plastid analysis (Pinson and Schuettpelz, 2016). However, the current distribution is most likely resulted from pre-Ice Age long-distance dispersal of fully functioning sporophytes from the Appalachian gametophyte species.

My scavenger hunt topic was to find plant adaptations to attract pollinators. Some plants produce brightly colored flowers (as seen above) to attract pollinating insects, such as bees and wasps. Bees are most attracted to flower colors on the blue and yellow part of the color spectrum, because they can easily perceive those colors. These colors allow the bee to locate the flower easily to get to the nectar and pollen resources in the plant, so they can carry the pollen to another flower to pollinate it. Bees are unable to perceive the color red, so they are less likely to visit red flowers, since they appear black to them. The bees will see these colored flowers and let their hive know about their location by doing a waggle dance in their hive.