Ohio is divided into two distinct geologies: limestone in the western part of Ohio, and sandstone in the eastern part of Ohio. Limestone is nonresistant in humid climates, causing the land to be worn down flat due to erosion over millions of years. Sandstone is a generally resistant type of rock and is eroded very slowly. Sandstone typically covers shale and protects it from weathering and erosion.

The original horizontal sedimentary rock strata of Ohio consists of limestone layers overlain by shale, which was overlain by sandstone. These layers tilted to form a low arch which then, as a result of erosion, created the Appalachian Mountains to the east. The erosion of the western Ohio limestone and sandstone/shale in the east happened by the Teays river, a preglacial stream, over the course of 200 million years.

The Pleistocene glaciers made their way through Ohio a few hundred thousand years ago. These glaciers were slowed down by the sandstone hills of eastern Ohio, causing the glacial boundary to go no further than Canton. However, since limestone is much more susceptible effects from the glacier, the glacial boundary extends southwards towards northern Kentucky.

Glacial till is a substrate consisting of lime and clay, and is primarily found in the plains of western Ohio. This substrate is mostly an impermeable soil and provides poor drainage and inadequately aerated. Due to this, water is unable to soak into the ground’s surface, creating pools of low oxygen availability in rainy seasons and intense droughts during dry seasons. The soil in western Ohio is high in nutrients and lime, great for growing plants, compared to eastern Ohio, which has a very low nutrient and acidic substrate.

Substrate for Plants in Western and Eastern Ohio

The basic substrate in western Ohio is limey and has poor drainage and aeration. Eastern Ohio’s substrate is acidic with good drainage but has low nutrients.

These five calciphile trees and shrubs have a distribution generally limited to limestone or limey substrates. I found these plants in Battelle Darby Metro Park with limey substrate.

The hop hornbeam got its name because the fruits look like hops, and the bark has fibrous strips like ribbons.

Fragrant sumac was super neat because when we scratched the leaf, it smelled sort of lemon-y.

Hackberry trees are commonly mistaken as elms, but they can be distinguished by their corky and warty bark.

Blue ash has a sort of gelatinous inner bark substance that, when exposed to air, will turn blue.

These trees can be identified by their ashy/light grey bark that can break into thin and narrow flakes.

Trees and Shrubs that Occupy the Glacial Till of Western Ohio

These five species of trees/shrubs generally are found in clay-rich and high-lime substrates, typically found in the glacial till of western Ohio:

These five species of trees/shrubs are generally found in the sandstone hill of eastern Ohio:

Major Determinant of Distribution of Species

The Cedar Bog –actually a fen– is located in Champagne County in Ohio. Unlike a bog, fens “flush” water by draining into the groundwater, which contains dissolved limestone. Cedar bog is located in the glaciated part of Ohio, which left the cite in the bottom of a valley. It is surrounded by hills that consist mostly of limestone gravel as well as sand, allowing for water to flow through easily and causes the valley to be a great aquifer, holding in a lot of groundwater. 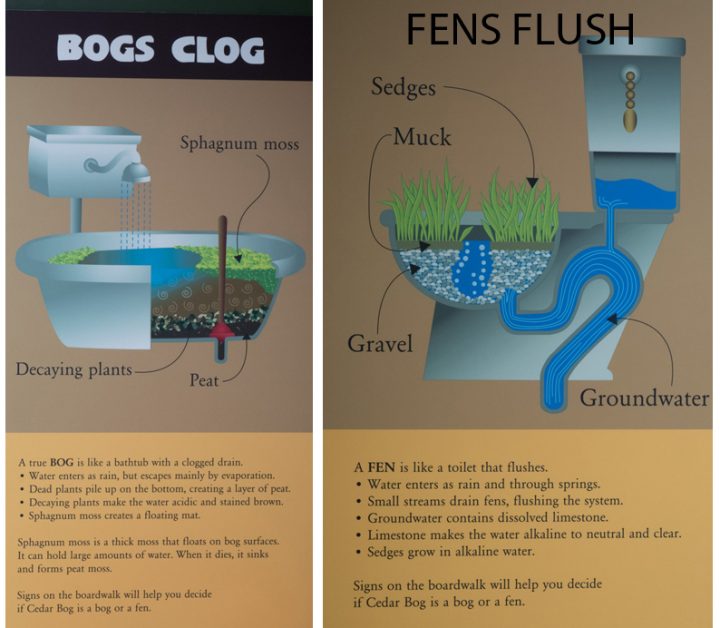 Since giant ragweed is wind-pollinated, it can be a person’s worst nightmare if they suffer from allergies. Giant ragweed is invasive, compared to its smaller ragweed counterparts, and can outcompete other plants. This plant can be identified by its incredible height — sometimes even reaching 7 ft tall.

Indiangrass can be identified by its golden-brown plumage, and can grow from 3-7 ft tall.